Matthew Matthew sent me this lovely photo of a labyrinth he walked recently in Queens. 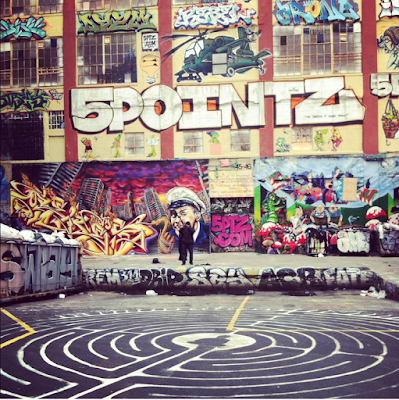 Friends and visitors to the studio and loyal blawg readers will know I am something of a labyrinth kook. My dad tried to get me into them, but they didn't spark for me until after he had died, really.

It was 2005, and we were shooting a documentary on the Oregon Shakespeare Festival, and it was a little stressful, and I'd walk a labyrinth in downtown Ashland to unclutter my head.

You might try walking a labyrinth and see what happens for you. Here's how:

Find a labyrinth near you. If you are in a city with more than 3 coffee shops, that shouldn't be a problem.

Stand at the entrance of the labyrinth. Take a deep breath. Try to clear your thoughts, then enter it. Follow the path. That's it.

The labyrinth is sometimes called a walking meditation, and if you've ever tried seated meditation, you know how tricky it can be to "clear your thoughts." How do you think nothing?

As you're walking the labyrinth, rather than trying to think nothing, which seems sort of impossible, simply notice what's happening as you follow the turns and twists in the path. What do you notice? Simply observe what bubbles up.

And yes, if you can experiment with surrendering all thought, and simply be in your body as it walks, simply be a quiet, mindful walker - that's nice too.

Half way through, you will come to the center. Some people like to stand in the middle for a little while, perhaps with eyes closed, simply breathing, reflecting on the experience of the first half of the walk.

When you're ready, start walking out. Walk at a pace that feels right to you - each step deliberate and mindful, and again, trying to concentrate on being a walker through a labyrinth.

I really hope you have a chance to do this sometime. You might find it pleasant or rewarding. Perhaps the patterns of the labyrinth will illuminate some patterns of your own life. It might be nothing more than 10 minutes of peaceful being, which could be reward enough.
Posted by I'm principal of a at 9:03 AM 3 comments:

Interesting Mayor's race this year in Portland. Sam Adams is not running, so it's up for grabs between the three major candidates. (As described by a Twitterer, the "big money" candidates!)

They are: Eileen Brady from New Seasons/Ecotrust, Jefferson Smith, Portland's state legislator and creator of the Bus Project, and Charlie Hales, former city councilman in the '90s and streetcar/light rail expert.

I'm friends with two of the candidates, and up until three or so weeks ago, hadn't really heard of the other guy, so I was assuming I'd have to make a tough choice between Jeff and Eileen.

Jeff is a great guy. He's funny, and so smart he can't get his ideas out fast enough. He also strikes me as deeply kind. People like Jeff.

I worked with Eileen at Ecotrust, and she is smart too, with an abundance of big ideas. Friends support Eileen and I see why. She is tough, and committed to her ideals.

Not too long ago, a parent at my son's futsal game, a friend, asked if I had heard about Charlie Hales.

"No. Not really." Compared to Jefferson and Eileen, he didn't seem as exciting.

"You should check him out," the friend told me.

Later that week, another friend, a neighbor, told us she was hosting a meet-and-greet with Charlie in her house. "How do you know Charlie?" I asked.

About 15 neighbors were there. Her (Italian) husband had spent the day making amazing food, including mini eggplant pizzas.

Charlie's wife was there, too - Nancy, a nice woman. She told me that she and Charlie attend one of these neighborhood meetings most nights. I asked her why Charlie was doing this.

"He saw that Portland was slipping a little bit, and felt he needed to run. It's a public service thing for Charlie." She also told me about his geeky love for how cities work.

Charlie is returning to local government after ten years in an engineering firm, consulting with cities around the country trying to reproduce Portland's success with streetcar and light rail.

Everyone grabbed a plate of food and quieted as Charlie moved to the middle of the small living room, in front of the TV. He was very open and direct. He began by saying, "No question is out-of-bounds. It's okay to ask anything."

Charlie spoke for a while about the core issues he's passionate about - neighborhood policing a big one - and then answered our questions. He was impressive.

I asked him why the money momentum seem to favor another candidate.

"Yes, Eileen says she plans on raising a million dollars before the primary, and I don't think that's a good thing for this city. We plan on raising half that and running a good campaign."

"Why isn't raising a million dollars good for the city?" I asked.

"That's not what Portland politics is about. You win with shoe leather. You knock on a lot of doors, shake a lot of hands, meet in a lot of living rooms, talk to a lot of people."

"What needs to happen for you to win?" I asked.

"People need to realize that this isn't a race for Senior Class President," Charlie replied. "It's a job interview. It's all about who has the experience to come in and do this job."

"It's not an easy job," one of Charlie's campaign volunteers later told me. He was an old friend of Charlie's and recently retired after working for the city. "It's an executive job. It's not a learn-while-you-go thing.

"The first day, when you get a call from the Police Bureau or Fire Department in the middle of the night, having to make a hard decision..." he trailed off. "It'll make your hair go white, lemme tell you. It's a hard job."

He smiled. "I don't know why Charlie wants to do it, to tell you the truth."

Last Thursday, I attended a debate between the three candidates to help finalize my decision.

The candidates fielded a wide range of issues and questions, from emergency preparedness to small business development to parking in NW. Every issue seemed to require a granular understanding of a mountain of complex factors, and it was Charlie who was up to speed and clear on all of it. His responses were concise and commonsense. His experience as a Councilman and neighborhood activist was evident. Most of his responses received spontaneous and widespread applause from the crowd. This guy clearly has what it takes to be a successful at this job.

So Saturday, for the first time since walking in Louisville neighborhoods with Ron Mazzoli and Harvey Sloane back in the '70s, I knocked on doors on behalf of a candidate. I walked with Charlie and other volunteers in the Sabin neighborhood, talking to people about why I believe we'd be lucky to have Charlie as our Mayor.

And I made these buttons. I'll give you or mail you one if you want.
Posted by I'm principal of a at 6:15 AM No comments: