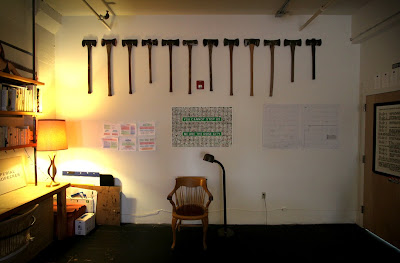 NJ installed this. The axes - most of them, anyway - that we used for the Timbers campaign. Nice work!
Posted by I'm principal of a at 10:34 AM No comments: 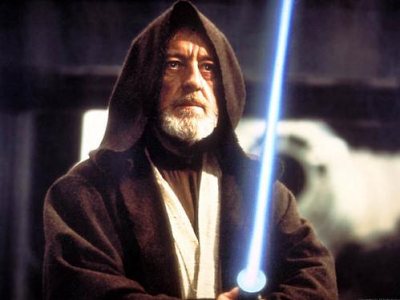 Showed my boys Star Wars for the first time this weekend. We often use this parent's guide to media site as a guide. It recommends Star Wars Episode IV as appropriate for 8-year-olds, my youngest son's age, but we were surprised just how violent it is. Not in terms of blood - though the dismembered arm in the Cantina is pretty gross - but in the astounding amount of human death.

Even a basic awareness of this context makes the celebration at the end feel a little discordant - even inappropriate?

We checked in with the boys mid-way through. You guys okay with this? You know this is just a story, right?

I hope my boys absorbed a little of what Ben Kenobi had to say, too.

"The Force is what gives a Jedi his power. It's an energy field created by all living things. It surrounds us and penetrates us. It binds the galaxy together."

After the movie, I did what we do these days and read the Wikipedia article about Sir Alec Guinness, who played the Jedi Knight. I was drawn to the heading, Religious Conversion, and read this charming story: 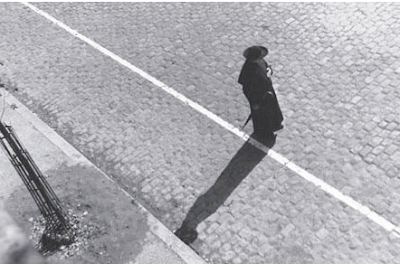 "...In 1954, while he was filming Father Brown in Burgundy, Guinness, who was in costume as a Catholic priest, was mistaken for a real priest by a local child. Guinness did not speak French, and the child apparently did not notice that Guinness did not understand him, but took his hand and chattered while the two strolled then waved and trotted off. The confidence and affection the clerical attire appeared to inspire in the boy left a deep impression on the actor.

For years, the article noted, Guinness recited the 143rd Psalm every day. I am interested in the Psalms. They are a collection of 150 poems written around three thousand years ago, many attributed to King David.

While on the train to work, I looked up Number 143 on my phone, and was touched by it, and what it revealed about Guinness, and how it connected with his role as the courageous knight.

A psalm of David.

1 LORD, hear my prayer,
listen to my cry for mercy;
in your faithfulness and righteousness
come to my relief.
2 Do not bring your servant into judgment,
for no one living is righteous before you.
3 The enemy pursues me,
he crushes me to the ground;
he makes me dwell in the darkness
like those long dead.
4 So my spirit grows faint within me;
my heart within me is dismayed.
5 I remember the days of long ago;
I meditate on all your works
and consider what your hands have done.
6 I spread out my hands to you;
I thirst for you like a parched land.[a]

7 Answer me quickly, LORD;
my spirit fails.
Do not hide your face from me
or I will be like those who go down to the pit.
8 Let the morning bring me word of your unfailing love,
for I have put my trust in you.
Show me the way I should go,
for to you I entrust my life.
9 Rescue me from my enemies, LORD,
for I hide myself in you.
10 Teach me to do your will,
for you are my God;
may your good Spirit
lead me on level ground.

11 For your name’s sake, LORD, preserve my life;
in your righteousness, bring me out of trouble.
12 In your unfailing love, silence my enemies;
destroy all my foes,
for I am your servant.

I stood in line for five hours for this 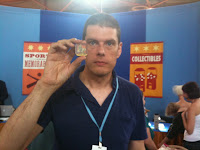 The Antiques Roadshow filmed the opener of their 2012 season in Eugene, Oregon this weekend, and I was given a ticket to attend the filming, have an item appraised, and possibly even appear on the show.

I have loved the Roadshow ever since Stacy Wall introduced me to the original British version of the show many years ago.

There's a TV ad for the show that shows people guessing the value of the items. Will the painting from the garage be worth $500,000? Apparently that happened in Eugene. I'm not really interested in that part of the show.

I'd heard I would be spending a long time standing in line, so instead of the 1964 Fender Mustang or the framed portrait of Cannonade along with the winning ticket from the 100th Kentucky Derby, I chose to bring something I could carry in my shirt pocket. 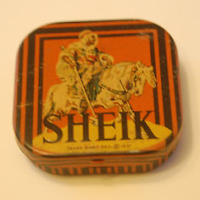 We live in a 1910 Portland craftsman house, and a few years ago, we renovated a basement that hadn't changed much in 90 years. The contractor reached into the beams and found an antique condom tin, complete with instructions, clear wrappers, and a small ad for Ramses Vaginal Jelly.

After a few hours in line, meeting other people, hearing their stories, I finally got to the front of the Collectibles line. I was now one of those dorky gawkers that you see standing in the background of the show. I showed the appraiser my item. Expressionless, he told me that the market for tins was down right now, but with contents, it might be worth $40-50.

He couldn't tell me what I was most interested in: who was the person who stashed that tin in the basement rafters, back in the 1930s? What was that story?

In a historic mood, later this weekend I stopped in thrift store around the corner from my house and picked up a few story-rich objects. They weren't expensive, a couple of bucks each, but they grab the imagination.

The first is an amazing photo postcard of Washington DC from the turn of the century. It's taken from NE Washington, possibly from West Virginia Avenue, and the only recognizable buildings are Union Station and the Capitol. 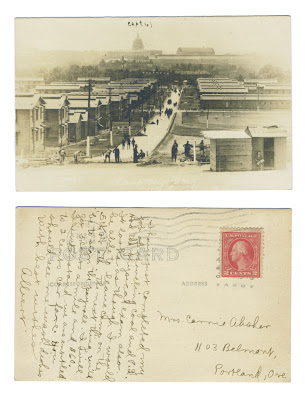 The letter is from Albert Asher, writing back to his wife? mother? Connie, in Portland. It seems Albert has crossed to country to join the Army, in the closing days of World War I? You can see soldiers in the foreground of the photo, working. Albert writes that he has passed the physical exam and is scheduled to leave camp on March 5 or 5, 1919. "You should see me wash dishes," he closes.

This postcard is also intriguing: 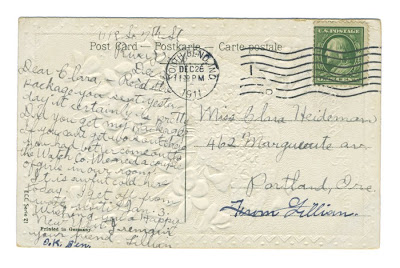 "Dear Clara," Lillian writes to her friend in Portland, Oregon from South Bend, Indiana. "If you can't get work out there, you had better come out to the Watch Co. We need a couple of girls in our room." It was the day after Christmas, 1911.

The Watch Company was the South Bend Watch Company, which made more than a million watches and employed 300 people, until it closed after the stock market crash of October 1929.

Lillian filled most of the card, but squeezed on the bottom is a short message, possibly from Lillian's beau? "O.K. Ben." he wrote.
Posted by I'm principal of a at 9:46 AM 2 comments: