Wisdom of the crowd + POV

As part of the Timbers campaign, we photographed a couple of thousand Timbers fans holding axes and chainsaws and striking NO PITY poses. They came out nice. We gave them to people to use as their profile photos online and we also used some in advertising. 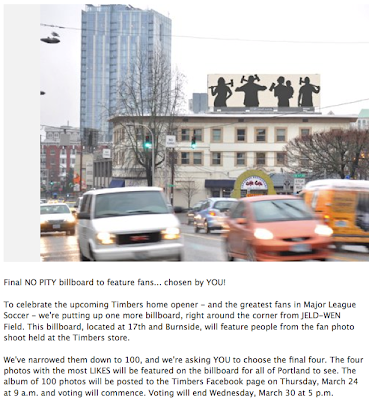 Last week we announced that we're creating a billboard with four of the fan photos and letting the fans vote on them. As of today, here are the sixteen finalists. 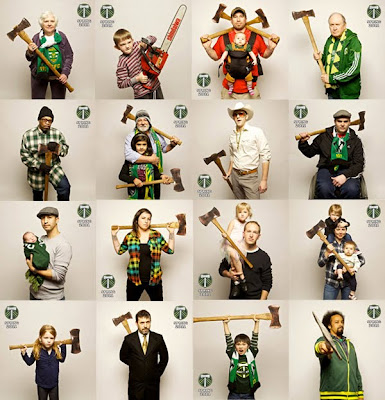 I’m happy with the finalists so far, but I think the wisdom of the crowd thing shows its limitations when you simply take the top 4 vote getters and create a composition with them. You end up with this:

Individually four great shots, but combined they make sort of an odd story.

If I had my druthers, I’d create my own composition, taking into consideration the photos that people like the best, but combining them to create a narrative that tells a broader story that lots of people could see themselves in.

Since parent-with-small-kids are over-represented, I’d choose just one to represent that group: the dad and ballerina. It might not be my favorite of the three family shots, but it’s clearly the crowd’s top pick, so I’d go with that.

If you take the other top favorites, they combine nicely to make a good story.

This would be a great billboard. I’m going to post it on the Timbers Facebook page and see what sort of reaction it gets. If it ends up the other way, I can live with it, but it won’t be as good.

That’s my point of view, at least.