My brother sent me an email today about the death of someone who meant a lot to both of us. 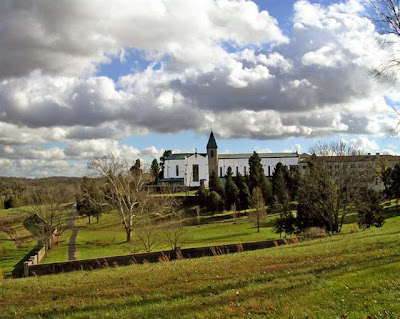 Matthew Kelty was a priest and monk who lived in the Trappist Abbey of Gethsemani in Kentucky. This Courier Journal article captures him well, I think, as do his own words on the monastery's website.

Back in the late '90s, I was one of the many retreatants he counseled with comfort and compassion, and a little bit of clever evasiveness.

It was 1996, and I'd just quit an advertising job, and moved from Amsterdam back to America to seek my purpose. I didn't have a job, or a plan of any sort, really. I thought I'd study religion, perhaps teach eventually. I visited a few grad schools. I sought substance, something with deep roots.

I was more than a little afraid that in my seeking I might be called to a something beyond what I could pull off, and entering the monastery represented the most extreme and terrifying commitment I could imagine. So, I thought, I'd better investigate.

I signed up for a week-long silent retreat at Gethsemani, joining the monks for prayers and meals, my time otherwise spent reading, in silent meditation or walking around the woods.

One day I screwed up my courage and went to meet Fr. Kelty. I stuck my head in his office on the first floor of the guest house, and he called me in.

I told him how I sought meaning in my work, that I wanted to fulfill whatever purpose was in store for me, and that I wanted to know how to discern whether the monastic life was right for me. I was sort of a mess, really, full of confusion.

He listened patiently and intensely. He handed me a small pamphlet he had written years earlier for young novitiates, but he refused to engage directly in my inner turmoil. Instead he wanted to talk about high school football.

"Where'd you go to school?" he asked in his thick Boston brogue. Trinity, I told him, in Louisville.

"They got a good football team. You play football?" he asked.

Um, no, I was more into theatre and art.

Small talk? This man was Thomas Merton's spiritual director! Where was the wisdom? I was getting frustrated.

Fr. Kelty looked at me penetrating for another moment, and slowly smiled. Then he stood up and walked around his desk, and gave me an unexpected hug.

"You're okay," he said, softly. "Everything's gonna be alright." Then he gave me a pat on the cheek and sent me back into the world.
Posted by I'm principal of a at 4:47 PM 6 comments:

Gorgeous clear cold morning in Portland and I am in the studio earlyish to get at it. 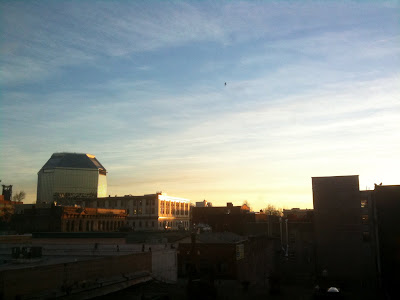 Also much on my mind about how our work fits with everything churning out there in the world. Alignment. Context. Also difficult to express on the blawg. For a blawger, I have a lot of blawg ambivalence. Maybe over coffee.

Yet, I deeply appreciate you, readers! - and all the encouragement you share. Everybody can use encouragement. So let me share this. It's from Bill Bernbach, someone I've written about before, a guy who still has something to say about the communication business. A visionary. From the dedication of his book.


We in the communications field - in radio, in television, in magazines, in newspapers, in posters - have developed unprecedented skills in mass persuasion. You and I can no longer isolate our lives. It just won't work. What happens to society is going to affect us with ever-increasing rapidity. The world has progressed to the point where its most powerful public force is public opinion. And I believe that in this new, complex, dynamic world it is not the great work or epic play, as once was the case, that will shape that opinion, but those who understand mass media and the tools of public persuasion. The metabolism of the world has changed. New vehicles must carry ideas to it. We must ally ourselves with great ideas and carry them to the public. We must practice our skills on behalf of society. We must not just believe in what we sell. We must sell what we believe in. And we must pour a vast amount of energy into these causes.


Thanks everybody. Talk to you later.