On the door of the 2nd/3rd grade class 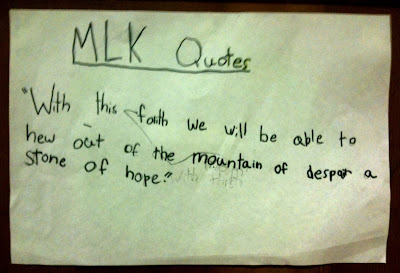 "Go forth and do great work" 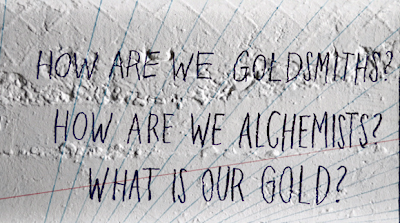 Yesterday I got the opportunity to spend time with two remarkable people, but I'm only going to talk about one of them right now.

Mattathias Schwartz has written cover stories for Harper's, features for the New York Times and was editor for one of the trippiest pieces of art-journalism I know, the Philadelphia Independent.

He had reached out to me because he's going to be working out of Portland soon, and wanted to see if there were opportunities to work together. He had worked in advertising for a while in his early days of writing.

I asked him how he saw things unfolding for him in the next few years, what he wants. "A couple of top-rate pieces of writing," he said, flatly. I asked him how he defined top-rate. I expected him to talk about writing mechanics or technique.

Instead he told me about a speech that mathematician Richard Hamming gave at Bell Laboratories in 1986. Hamming spoke to scientists about what constituted good research, but the speech has wider implications. "Hamming said if you want to do important work you must work on the important problems in your field." You mean top-rate writing has to serve the world in some way? "Of course," Mattathias said. "It has to be meaningful, relevant."

What about the quality of the writing itself, I asked? Pause. "I don't think it can be reduced to criteria," Mattathias told me. "Have you read Christopher Alexander? he asked. (You mean the guy who wrote my all-time-favorite book on architecture?) "It's a quality that can't be defined," Matthias said.

"I just heard a story about the drummer for the Doors. They said his drumming was tight, but surprising. That's what I want," Mattathias told me. "Tight and surprising. Doing both is hard."

"I'm not there yet," he admitted. "I've maybe done two pieces of top-rate work."

It was an inspiring, encouraging hour and a half with a guy I am certain has much top-rate work ahead of him.

Later in the day I got an email from Mattathias with a copy of the speech that Hamming gave. Wow. It's so... clear. High-octane, a real kick in the pants. If I were still teaching, it'd be on the assigned reading list.

If you could use something like that, here you go.
Posted by I'm principal of a at 8:53 AM 2 comments: