This map grounds our work: 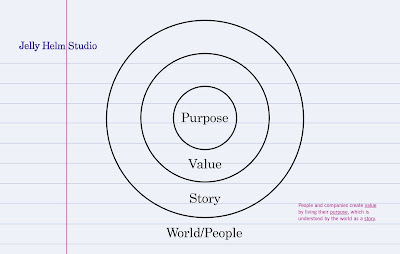 People and companies create value in the world by living their purpose, which is understood by the world as a story.

We consider ourselves an artisan communications studio - we seek to tell the tastiest stories - and that's why we choose to work with purpose-driven people and companies. Art and craft are important, but the best stories are connected to a deeper purpose. Those are the stories people are hungry for, now more than ever. 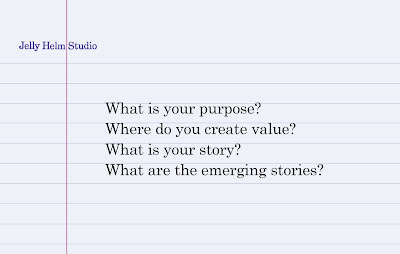 When I work with someone, we start with these four questions. It's a great way to begin the relationship, and something we return to again and again. Your purpose can be creating a world where every single human being has free, shared and open access to the sum of all knowledge, or it can be making doughnuts. It really doesn't matter. But things start getting super-powerful when your deeper purpose aligns with the bigger stories emerging in the world.
Here's wishing all of us a purpose-filled 2011.
Posted by I'm principal of a at 9:42 AM 2 comments: 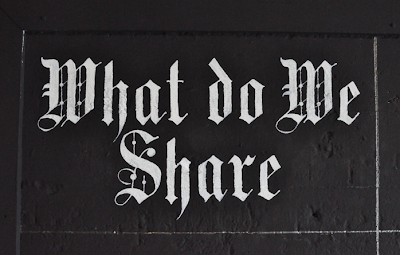 Well we all shine on

After posting this video, it made me think about working at the Martin Agency in Richmond as a young art director in the early '90s, a year or so after graduating from Portfolio Center.

We worked in the Shenandoah, a turn-of-the-century converted apartment building. I sat on a floor with half a dozen master art directors. Some of them - like Bob Shira, and Danny Boone - smoked while they worked. Everyone had a drafting table as a desk, not a single computer. 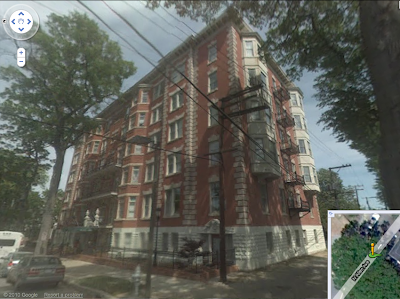 We were all making print ads, mostly, hyper-crafted, that was Martin's thing. We traced type. We ordered type from typographers. We'd cut it apart, tweak the spacing, send it down to the stat room to get a photostat, paste it onto a board, and stare at it. We'd lay out our work in the hallway. Other art directors would walk by and take a look and maybe stick their head in your office and make a comment.

We were still figuring out how to make TV commercials. Jerry Torchia did some cool stuff on Wrangler and with the Maysles brothers, but a lot of the stuff we were doing was pretty stiff and contrived - filmed print ads, really.

I wasn't looking for it but somehow I got a 3/4" tape with a copy of a Nike commercial that changed how I looked at advertising forever. I watched it in "the TV room," a strange space crammed between two offices a floor above me, maybe 15 feet deep and three feet wide. I squeezed between the TV and the wall and put the tape in and watched. Hit rewind, watched. Watched again.

What was it? It wasn't a concept. What was the concept? No copy, or punchline, besides Just Do It. The type, what was that? It moved, like something in an art film - modern and beautiful. The images. Sports like nothing I'd seen on TV, better than what I'd seen in most movies. Such memorable images. A guy sitting on a basketball backboard? Swinging a golf club with a tangle of electric wires in the foreground? Scottie and Michael stretching together? That triple cut of Joan Benoit. Michael in silhouette, holding the ball above the kids? Modern and graphic, but human and surprising.

That cool squished look! What was that? I'd never heard of anamorphic lenses. It just looked... right. It had a point of view. I hadn't heard of the director, someone named David Fincher.

And the song! The lyrics! The kids! The teeth! The jumping rope with the tripping! What kind of company would say that? Nobody made commercials like this. How do you even make a commercial like that? It was so pure, it was pure feeling.

I could watch it a hundred times. I have.

Later, I went to work for Wieden and Kennedy, and was told the secret by Dan Wieden himself. "You have to understand, Jelly," he said. "TV is primarily an emotional medium." And that was all he said about that.

Years later, I asked Jim Riswold to put a reel together of his work(!) to share with a 12 class, and I noticed he didn't include the spot. "Jim, you made a mistake, you left off Instant Karma."

Well. For me, back as a young art director trying to figure out how to powerfully use the medium of film, the idea seemed to be something like, show that we become like angels when we use our bodies, and use the best and most interesting filmmaker you can find, and, use a profound and relevant song by one of the heaviest musicians ever, and, maybe especially, respect your viewer.

It confirmed that Nike was the coolest company ever. They not only made a great product, they knew who they were and expressed it clearly and confidently.

Same stuff still interests me: Artfully told, and true.
Posted by I'm principal of a at 10:26 PM 4 comments: