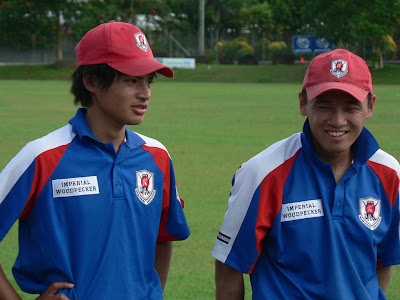 Pleased to announce that my founding client, Imperial Woodpecker, is sponsoring the Japan national cricket team. 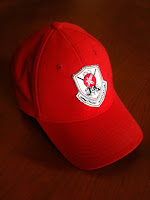 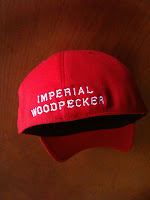 Thanks Michael Buchino for passing this along.
Posted by I'm principal of a at 10:00 AM No comments: 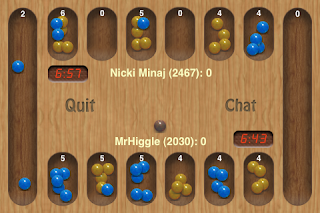 I was playing Mancala on my iPhone recently against an anonymous player somewhere else in the world. His user name was HURRYUP, mine was MrHiggles, I think. I change names a lot and always try to pick a name that will make my opponent underestimate me, like Granny1919 or Puffybear.

HURRYUP gave me about six seconds to make a move, then sent me a chat message. The game has a few standard messages you can choose from to send your opponent during the game: It's your move, Nice move!, Good game!, Thank you!, I love this game!, etc.

It's your move, HURRYUP said.

As the younger brother of a sister seven years older, I know a thing or two about passive-aggressive tormenting, so I decided I would make HURRYUP wait a little while.

In a few seconds, I got a second message. It's your move.

Thank you!, I replied, and continued to do nothing.

After a minute or so, I moved. He instantly played his move, and I responded, of course, by doing nothing.

The hardcore Mancala players don't like to quit, because if you quit, you forfeit the game, and it affects your overall record.

More nothing. And more. Then I sent a chat. Good game!

I love this game!, I chatted.

It was sort of funny, sure, but the seven minute A-hole Contest also made me heat up a little and feel creepy. It's strange how online anonymity can easily lead to trollish behavior - assuming the worst of the other, acting aggressively. Makes me wonder how different of a place the online world would be if everyone had to put their name on everything they did and said.

Here's an interesting story about how anonymity threatens civil discourse the off-line world as well. It's the from the October NW Examiner, and it's by publisher and editor Allan Classen. 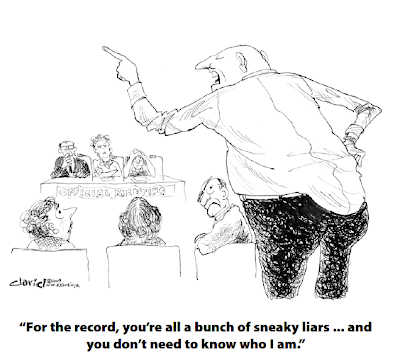 An essential element of civilized dialogue is the personal introduction; everyone should be known to other participants in the discussion. The internet has shattered that assumption for much of what passes for public dialogue these days. Unidentifiable mystery people comment on blogs and internet forums as the norm. Not surprisingly, the communication often goes from rude to acerbic to ballistic, as a false bravado overtakes otherwise meeker individuals hiding in anonymity.

An entirely different attitude would reign if these keyboard crusaders were suddenly confronted in person by the targets of their venom. And hyped accusations would boomerang if presented before a roomful of peers, the ultimate keepers of one’s reputation.

One of the virtues of neighborhood politics is that the players generally interact face-to-face. Most have known each other for some time and have multiple connections. The person you tell off may be the parent of your child’s playmate or a business client of your best friend. Imprudent words can come back to haunt you. Being a known member of a community also helps keep things in perspective, holding us accountable for how we behave while also imbuing a degree of tolerance for our well-known tendencies and foibles.

I witnessed a case of self-righteous sniping from a Pearl resident at a board meeting of the neighborhood association last month. With a stern tone, this man accused the organization of violating proper protocols in not informing him and residents of his building, Tanner Place, of plans for a public loo in nearby Jamison Park. He spoke of being “blindsided” by a “terrible lack of information” and feeling “very annoyed” that he didn’t know earlier of the association’s support for the loo.

He further suggested that the unstated purpose of the project was to serve the homeless, a goal he opposed. He felt a restroom was needed for park users only during warm-weather months and daytime hours.

He wasn’t endearing, but I’ve heard worse. What pushed my buttons, however, was that after the meeting I asked for his name, and he refused to give it because he didn’t want to be quoted. He must have reasoned that I wouldn’t quote someone if I didn’t have a last name, and even if I identified him as “Frank N.,” no reader could know for sure the reference was to him.

I replied that it was a public meeting, but he still wouldn’t give up his last name. I ran into him the following night at the Pearl Party and renewed my request for his name. Still mum.

It didn’t take me long to track it down.

When I addressed him as Frank J. Niezgoda in a later email, he was a more circumspect person. He confessed a heretofore undetected reticence for public speaking, explaining that he didn’t give his name when asked because he was “a little flustered.”

No longer an unknown, Mr. Niezgoda felt he had some explaining to do. He emailed me three times with further self defenses. He didn’t recognize me at first. He didn’t know a reporter was in the room when he spoke. He wasn’t really calling anyone into account. He’s afraid of identify theft. He wasn’t trying to be rude or secretive. He even wished me a nice day.

As with many people, the anonymous Frank N. behaved differently when his full identity was known. He was less critical and more humble. That’s a good thing. Public business goes better when everyone must stand behind their words, and everyone is equally accountable for positions they take.

Maybe we can’t all get along, but the chances are better when we know who “we” are.
Posted by I'm principal of a at 11:21 AM 1 comment:

It was like chum in the water. It got more play than anything I'd posted, ever. Quite a few people commented on the friend weeding, an unseemly topic in facebook.

Some gave practical tips on making facebook work for them.

Some shared what they liked about being connected. 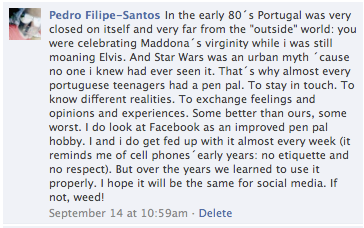 Quite a few people expressed a similar struggle to get their heads around it. I always find this comforting. Other people's confusion.

I was given the most pause by the thoughtful and revealing comments by Kat Walsh. 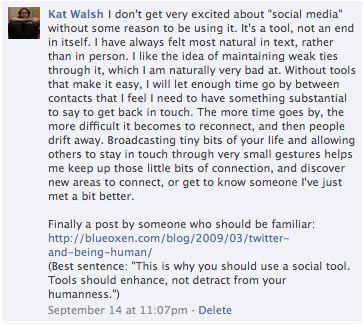 I am interested in Kat's and Eugene's thoughts about engaging mindfully in this media. How does the screen/Interpipe enhance our humanity? How does it detract from it? How can it add more joy to our lives? When does it take away joy? 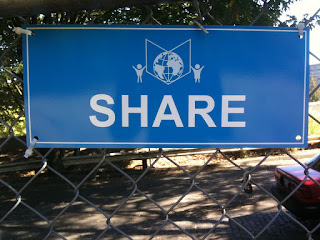 Kathleen Lane, a Portland writer, is using my studio tonight for an event called simply, SHARE. She has invited a group of local artists and creative people - writers, illustrators, musicians, photographers, tattoo artists, cooks - to share a space for two hours of creating.

They spend the next hour sharing whatever they've created: food, stories, music, art.

I love the idea, simple and brilliant, and exciting to see what the cross-pollination and introductions will yield.
Posted by I'm principal of a at 9:20 AM 3 comments:

They help me get my head around things. This awesome map records all interplanetary travel. Thanks Dave Baldwin for sharing. There are some other Universe brain-blowers in the same Flickr folder, and then another folder of other incredible maps. Wow.
Posted by I'm principal of a at 4:20 PM 3 comments: 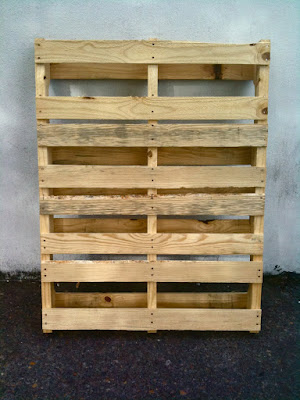 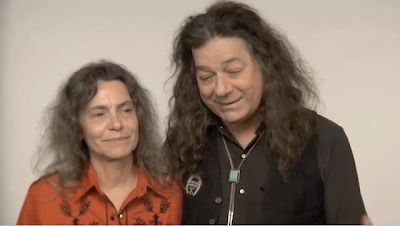 What a group of interesting, thoughtful, authentic Oregonians we got to interview for this Oregon Humanities film series. None more compelling than Fred and Toody. Awesome.
Posted by I'm principal of a at 10:44 PM 1 comment: 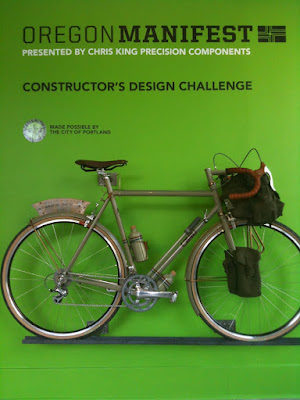 Great show on Bike Culture and the future of biking in Portland at NW 10th and Hoyt. Exciting content, tasty presentation. The Universe has been telling me lately that biking is in my future, personally and professionally. Alright.
Posted by I'm principal of a at 2:33 PM No comments:

Devil takes it on the chin 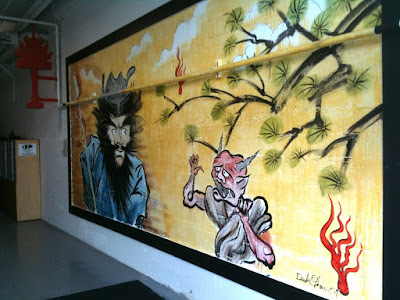 Awesome new mural in the Goldsmith Bldg. lobby by Derek Olsen, tattoo artist and otherwise artist. The story that nobody gets tired of.
Posted by I'm principal of a at 9:15 AM 1 comment: