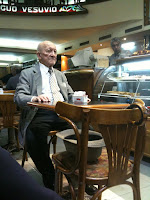 I am not a good traveler. I am freaked out being in a situation like this morning, when I tried to order a coffee in a local café with my primitive and comical Spanish and get away clean. I sit down and order oon café con letchay pore favore. The guy says something to me, and I look at him and nod, open-mouthed, like an idiot. He probably said something like, “would you like anything else?” and I just nod and stare at him, and so he says something a little more irritatedly and impatiently, something probably like “well, what would you like, then?” but I just keep nodding, like, Yeah, whatever you’re saying sounds good. He sort of shrugs, takes the idiot’s money and I chug my boiling coffee and get out of there.

It was interesting to hear Jimmy Wales at the opening press conference say how the cultural and language differences of all the attendees of the Wikimania from around the world, how the differences are trumped by "Wikipedia culture, Geek culture."

There's a culture, and it has a heavy technological component, but 'Geek culture' doesn’t sum up the powerful and uniting story. What is the story?

For me, it’s hard to top the goosebumps I get from the vision written on the business card. Is that the biggest story? 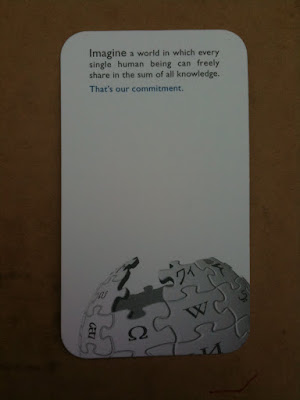 In addition to the vision of world-knowledge shared with everyone on earth, you hear a lot of almost sacred talk about how that knowledge was created: the belief in the people, the openness, the sharing, the transparency.

Then there’s the why of all this, the belief in the power of ideas, ideas that are free not just as in free beer, as Michael Snow, Wikimedia’s board Chair, said, but free to use and modify and share and share a modified version of, and make money off of it, or not.

Then there’s the people getting together part. People coming from all over, sharing ideas, giving their talents in order to build something beyond what any of us could create as individuals.

For me one of the most compelling aspects of the story is the unknown part of it. Nobody knows where it will all lead, this tool that lets human beings create things collaboratively. Nobody knew the story would unfold as dramatically as it has. Nobody knew a little free online encyclopedia would turn into the largest assemblage of knowledge, ever? What happens next? Jimmy Wales said we’ve only had a tiny hint of the power of this movement.

The line up of Wikimedia's investors – The Ford Foundation, Hewlett, Alfred P. Sloan, and today they announced that the Omidyar Network's $2m dollar grant – gives you an idea of how important this work is becoming. It’s a privilege to be a part of it.

If I had to reduce it all, right now, for me, it’s about growth, the flowering of our human potential. That’s the stuff that is just too exciting to me - the explosion, a becoming, the wave that we are all riding on, in one way or another.
Posted by I'm principal of a at 2:53 PM 6 comments:

This summer, I was part of a group that came together to respond to an RFP from the Wikimedia Foundation, the people who operate Wikipedia. The hub of our group was Fenton in San Francisco. They're a public advocacy PR and communications firm with clients like MoveOn and Greenpeace. Sea Change was brought in for their online fundraising expertise. Their clients have included Amnesty International and World Wildlife Fund. And I lead the creative.

With three different entities and four strong personalities, the pitch could've easily been a mess of control and leadership. Instead our process found its center very naturally, with each of us leading when required. What might have looked from the outside like deference or politeness was actually an acknowledgement that all four of us had much to offer, so we listened. We also shared a belief in the fundamental power of story, which rooted our work.

So we pitched and it went well, and last week made it official. And now I'm in Buenos Aires for Wikimania 2009, the 5th annual global conference for the people who write and edit Wikipedia. 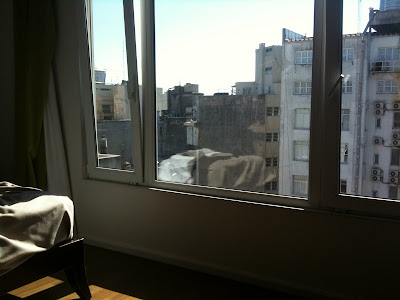 The 500 or so volunteers from around the world are here to talk about their work, how to make it better, how to get it to more people, how to get more people to participate. Tomorrow morning the conference officially kicks off with a speech by Richard Stallman, the far out guy behind the free software movement. I can't wait.
Posted by I'm principal of a at 8:15 AM No comments:

One last thought I'll share before I get to it, something that's seemed to resonate recently in a couple of meetings, something at the heart of my work, maybe at the heart of a lot of the changes happening in our business and the world. 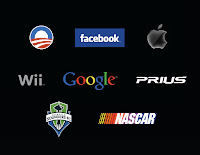 Loyal blawgists might recognize the roots in my presentation from last year's Portland Creative Conference. I've called them 21st-century brands, post-consumer brands, but now I'm calling them people-powered brands. What do they have in common?

People-powered brands/stories are not manufactured by an ad agency or Corporate Mktg./Communications. Their success is not connected to a collosal media spend.

The storytelling of people-powered brands happens primarily through experience.

Finally, people-powered brands are open, to be lived, created, shaped, shared and interpreted by the people.

Is this the future of all brands? What is the role of an ad agency in the era of people-powered brands? Discuss.
Posted by I'm principal of a at 8:18 AM 7 comments: 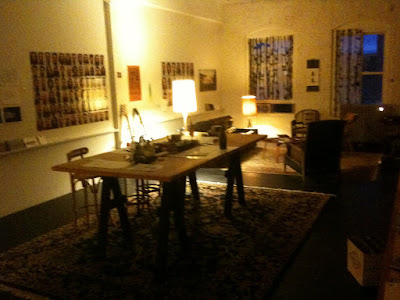 Got to experience Chinatown at 5 a.m. this morning for the first time. Kind of nice, actually. A little sketchy, but peaceful and quiet like I haven't seen it.

I just dropped off my mother at the airport after a good visit. Had a little reception for her last night at my studio and it was fun. A nice group of people, lots of kids.

Now back to work and it feels good to be in my space in the morning before the sun rises. I have an abundance of work I'm passionate about and I'm ready to get to it.

You can see a bunch of portraits on the wall of my studio. I'm trying to figure out the best way to use them in telling the story of this fantastic biotech company I'm working with. Prepping a short film I'm shooting this week for Oregon Humanities about the power of a new idea. Interviewing an amazing bunch of people from around the state - people doing thoughtful work in arts and culture like Pancho Savery, Thomas Lauderdale, Wim Wiewel, Liz Woody, Tom Spanbauer, Kristan Kennedy, Carrie Brownstein, Randy Gragg, John Jay, Jesse Beason, Pete Rock, Lawson Inada - wow - and crossing my fingers on a few others. Also about to step into a new project with a new client, a total dream.

Well this is cool 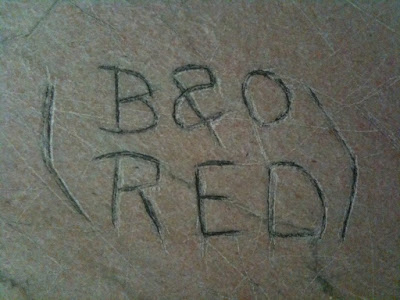 Hobo graffiti, some of it 90+ years old, carved in the wood and marble of the Mt. Hood Train Depot in Hood River (National Historic Register, built 1911). 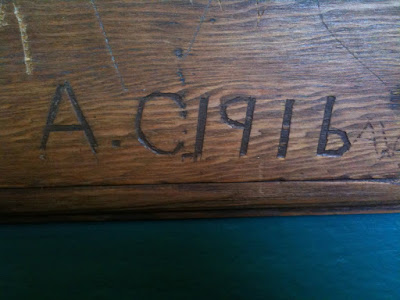 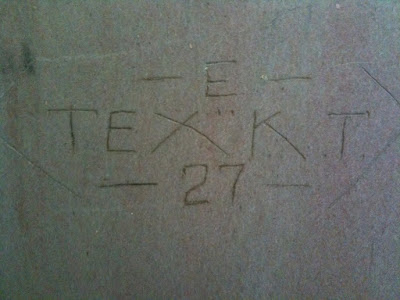 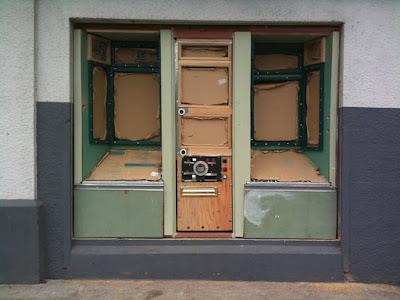 Intrigued by my new neighbor, located in the doorway to the left of the main entrance to the Goldsmith Building. 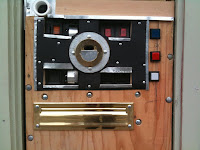 It's a work in progress, but seems to be coin operated with several windows, various peep holes and a mail slot. It takes the space formerly occupied by The 24 Hour Church of Elvis. Hm.
Posted by I'm principal of a at 2:00 PM 1 comment: 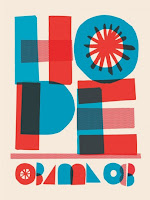 Phil Busse invited me to lead a class at the Northwest Institute for Social Change yesterday, and I began by asking the budding film and audio documentarians to introduce themselves from a perspective of 5 years from now, and to tell us what they've been working on.

It was powerful to listen to these young people narrate their own stories from the future, to use imagination and play to envision their own growth and development.

"My name is Eli," one of the students began, "and I graduated from college, and then I got my graduate degree, and my dissertation on the state of the American Educational System got noticed by the Obama administration, and they hired me to work for them.

"For his second administration. Because he was re-elected, of course."

"What did they notice about your dissertation?" I asked. "What insights of yours made an impression on them?"

"That we'll never develop one model of success for education. That all students learn differently, and therefore we need to develop different models."

Powerful exercise. I had no trouble imagining that the students would accomplish everything they described, and then some. If you try it, let me know how it goes.
Posted by I'm principal of a at 12:33 PM 1 comment:

My best creative direction ever

A friend/ex-student sent me this wonderful email this morning. (Blawged with permission.)

Right now I'm working on a campaign for Kobe.
They're asking for a big, global, epic TV campaign. So I guess I've been
thinking about it a lot.

Anyway, I had a dream that __ and I presented some Kobe ideas to you in
the 12 space from a wall covered with stuff. We were real excited. You
didn't like anything we showed.

I woke up with a feeling of confidence, and anxiety.
Probably right where I need to be.
Thanks for the subconscious creative direction.
Posted by I'm principal of a at 9:29 AM No comments: