This is why I love having a blawg

Thanks to Julian Munro for sharing this with me so I could share it with you. Stevie Wonder is so special. 23 years old here. Wow.
Posted by I'm principal of a at 12:49 PM No comments: 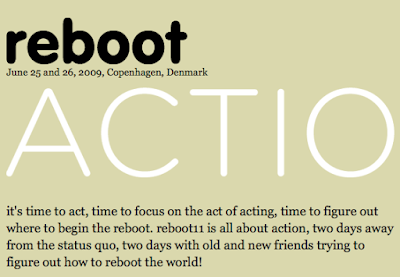 Colin Dodd told me about this cool conference in Denmark going on yesterday and today. The titles of the talks fascinate me. Bottom up cities. Future-building for Wikicrats. 21st century stories. And of course we can watch it unfold live on Twitter. Right now. The speed of the unfolding is blowing my mind.

Okay enough futuresmiling. I've got work to do.
Posted by I'm principal of a at 8:22 AM No comments: 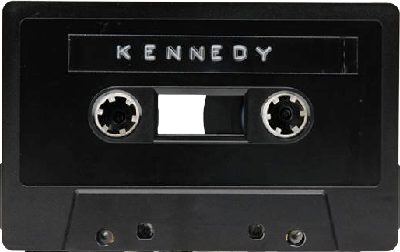 David Neevel mixed one side, Matthew Carey the other. David and I made the site.
Posted by I'm principal of a at 10:32 AM 1 comment: 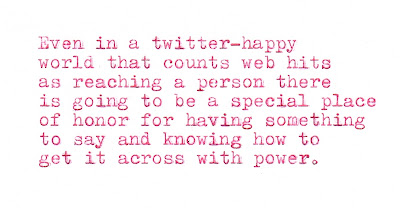 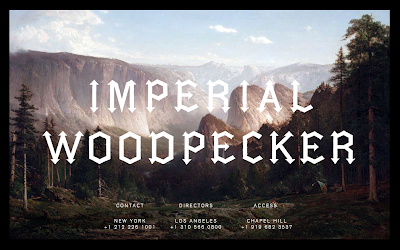 Our friends at Imperial Woodpecker have been busy lately, producing these fine commercials for Wieden+Kennedy and Nike.

It's good to see a client do well. I don't think the logo/identity design is entirely responsible for their success - check out the sweet apple crate! - but it's nice to play a part in this success story. 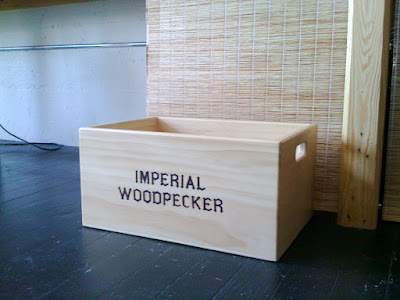 I'm going back to school 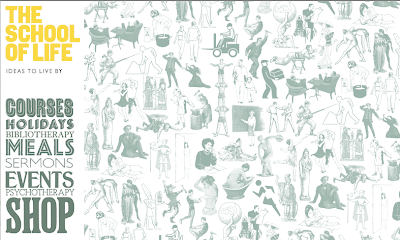 Thanks to Jennifer at Oregon Humanities for passing this along, Alain de Botton's lovely idea for a school, currently accepting students on Marchmont Street in London.

I love that the U.S. Government issued these 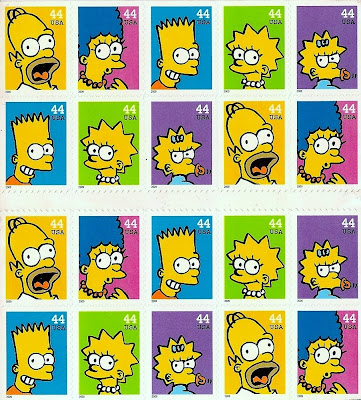 Stamps honoring the man who said, "You don't like your job, you don't strike. You go in every day and do it really half-assed. That's the American way."

"Got any of that beer that has candy floating in it? You know, Skittlebrau?"

"Old people don't need companionship. They need to be isolated and studied so it can be determined what nutrients they have that might be extracted for our personal use."

"I'm like that guy who single-handedly built the rocket & flew to the moon. What was his name? Apollo Creed?"
Posted by I'm principal of a at 1:15 PM No comments:

Came down to SF to participate in what has turned out to be an interesting, fast-moving and information-rich conference pulled together by Ed Cotton at BSSP. 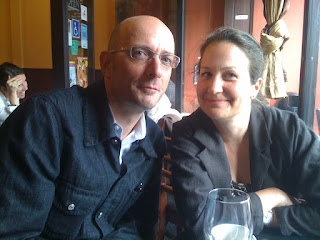 My group consisted of my good friend and former partner Mark Barden, who invited me and his wife, artist and writer and mother Doris Mitsch, to join him in giving a presentation on the topic of Yes.

Super-stimulating conference so far. Highlights have been the mask work from William Hall, the musical improv of Joshua Brody, the clarity, pragmatism and idealism of Paul Kim from Mozilla and Alexis Madrigal from Wired, the passion and urgency of Heather Fleming at Catapult Design. Interesting presentation on the evolution of "good" from Madison Mount at Ideo. 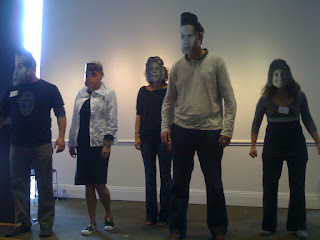 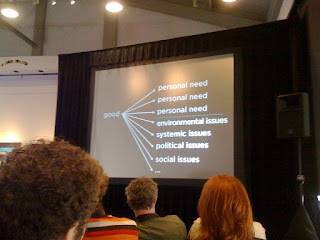 Actually, every presentation has been insightful and valuable in one way or another.

I tried un-plugging for a while, and actually find myself more engaged when there are several streams competing for my attention? Also find myself listening harder for nuggets that may make for good things to share, which seems to be focusing me in a way that passive note-taking doesn't?

Also interesting to me was the clear hunger that so many people have to orient their work around meaning and purpose. 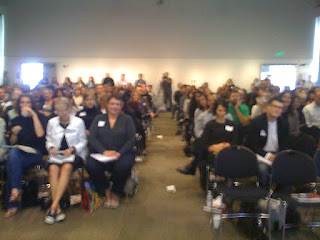 Also interesting was how enjoyable I found giving my presentation to be. That's not a given. Speaking in front of a large group of peers is challenging.

Final set of presenters begins with Alex Frankel, interesting and likeable guy who spent a couple of years as a low-wage worker at several giant American companies, and Tucker Nichols, the artist behind the Anonymous Postcard project.

I look forward to talking with people at the end of the day. A lot of exciting things happening out there. I know, I know, I say it all the time, it's boring, but what an exciting time to be alive.
Posted by I'm principal of a at 1:42 PM 5 comments:

I found this at an estate sale this weekend. It is a handwritten letter that was inside an envelope pasted in a scrap book. It contained a tiny square of woven black wool and two pressed flowers. 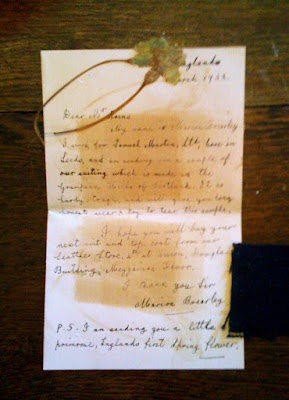 My name is Marion Briarley. I work for Samuel Martin, ltd, here in Leeds, and I am sending you a sample of the suiting which is made in the Grampian Hills of Scotland. It is hardy, tough, and will give you long honest wear - try and tear this sample.

I hope you will buy your next suit and topcoat at our Seattle store, 4th at Union, Douglas Building, Mezzanine Floor.

I thank you Sir

PS I am sending you a little primrose, England's first Spring flower.

Everything about this is right. How could Mr. Raines resist?
Posted by I'm principal of a at 8:58 PM 8 comments: 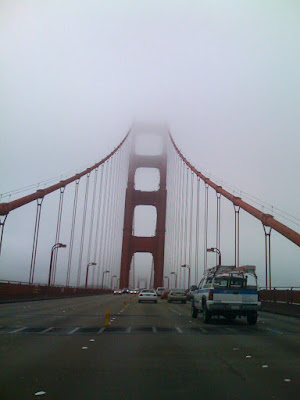 I first met Biz Stone in 2007 at a conference. At the time, Twitter was sort of insider-hot, but not the insane thing it's become lately.

Attending the conference was part of my attempt to understand what the hell was happening in the digital/internet/media world. It turned out to be a pretty special event, like a internet/media version of TED, intimate and insight-filled and chock full of heavy people from Michael Eisner to Arianna Huffington to the editors of The Onion to the producer of the Daily Show to the founder of Flickr to the creative director at Nokia. All the internet jedis, from Barbarian Group to AKQA, etc. Vint Cerf was there. He invented the internet.

Here's what left the deepest impression: These tech wizards, they weren't slaves to their technology. At most conferences, every time there's a break, people go off by themselves and crack open their laptops or start poking their iPhones, but at this one, after each session, people would immediately cluster in small groups and talk to each other and bullshit and laugh. 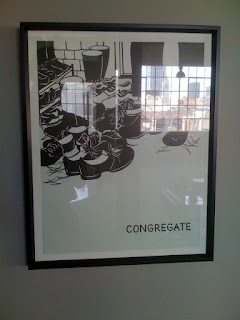 Anyway, the next year, I met Biz again after he sent in an application to SEEKING, an experimental recruiting thingamajig we did at W+K. He was one of 36 people from around the world we flew to Portland as part of a talent search. [Though he admitted he wasn't looking a job; he was seeking recruiting ideas for Twitter!]

Then I lost touch with Biz for a while, but because of Twitter's expanding role in the hyperinstantconnectedsharingness thing that fascinates me, I kept seeing him everywhere.

Finally, when Twitter turned down yet another kajillion dollar offer, reportedly because they thought that their potential was bigger than money(!), I was so impressed I had to call him. We had a rich conversation, and it led to an invite to come down and talk about some of the issues Twitter is facing and the questions they are asking.

Friday I spent the day there.

Besides Biz, I talked with Doug, their creative director, and Chloe and Anamitra, who are considering how Twitter creates value in the business world. 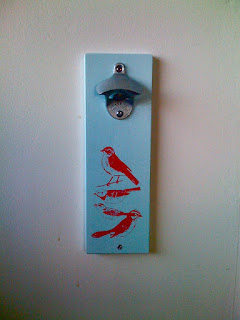 "What was Twitter like?" people have asked, and it was cool, definitely, but I am pretty spoiled on cool offices filled with impressive groups of bright, talented young people. What impressed me most was not the bike rack in their living room or the catered meals, or even the creative capital of the organization, but the sense that I got of their shared purpose, and the quality of questions they are asking themselves. Questions about creating value (vs. profit), about what role they can play in connecting people and inspiring creativity, about the importance of openness, transparency, humility and service. Inspiring. 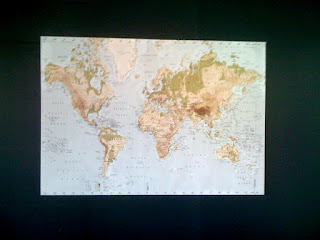 And it might not have even been the highlight of my trip? Another serendipitous meeting led to the possibility of doing some work on Wikipedia, which I consider the single greatest manifestation of the promise of the internet. Wikipedia is so incredible. Yippee.

And then there was the four-way storytelling between me, Mark, Cleo and Josie Barden.

All told, an inspiring and fun 36 hours. Exciting things unfolding in the world.
Posted by I'm principal of a at 3:22 PM No comments:

Thanks J. Lowe for sending this.
Posted by I'm principal of a at 3:33 PM 3 comments: