Three for three this week with Give Pizza A Chance, the artisan pizza cart around the corner on Stark, and if I follow my pace, this will be my second week in a row with pizza from there for lunch, every day. 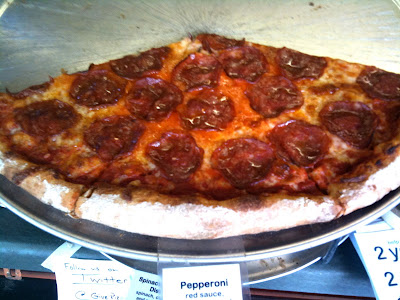 The Spinach Deep Dish. The whole wheat crust is made daily, and it has this fantastic buttery/crispy bottom, while the top is chewy and soft, with the ingredients flipped in order, cheese on the bottom and sauce on the top, Chicago style. I'm honestly breathing more deeply just thinking about it.

The Greek is new, and it's nice. A sicilian-style crust, and simple, with greek olives, artichokes, tomatoes, some sort of heavenly olive oil. Sigh.

Today I was sitting there eating my slice, and some guy must've heard my soft moaning and said to me, "That Greek is pretty good, isn't it." He was a huge guy with a shaved head, thick studs in both ears, giant lambchop sideburns. "John is out of control," he said, shaking his head, referring to the guy who runs the cart.

You and John old friends?

"Actually, John's family and mine lived together as part of a numanistic faith community."

At least I think he said "numanistic"? But when I looked it up afterwards, I couldn't find much other than this, on a blog called Numanistic Experience. 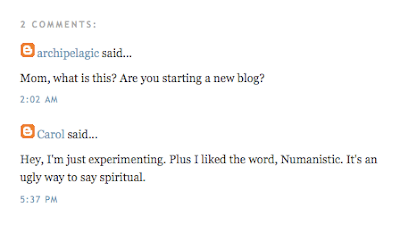 I asked my fellow Greek pizza fan to explain. "We're an intentional community. We live in consideration of our impact on the world and each other. Instead of trying to make yourself invisible, which is sort of the normal way to live in a community these days, we try to put ourselves out there, in support of each other," he said. "It's not easy."

"We don't live there anymore. My wife and I are finishing eight months in Bangladesh doing development work, and in June, we'll be moving into a house in a regular neighborhood. But we'll try to take some of that community mindset with us."

He left me thinking about the overlap between those values and the delicious pizza. Once I told Aaron that I believe 'Artisan' to be the model that points the way forward for business. "Artisan is just another way to say- " I started to say, "Spiritual," Aaron finished.

Love. That's what I was going to say. Artisan means loving something - whatever it is that you make or do - as much as it can be loved, and then loving people so much that you have to share it with them. It transforms everything: the process, the product, what sort of quality you demand, who you work with, your relationship with your customer/client, everything. Can't be faked. Can't be adopted strategically. People can tell. 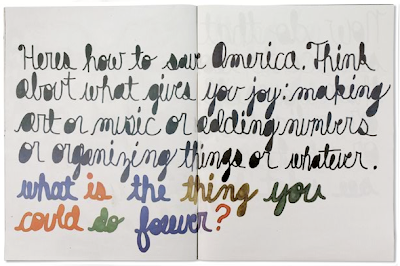 There's job security in artisan. The only people who can compete with you are other artisans, and they're rooting for you. They like good competition.
Posted by I'm principal of a at 2:25 PM

I'll vouch for love as the key ingredient to food that makes you go "mmm." My Grandma Poshusta (100 and counting) makes a simple potato/dill soup: potatoes, onion, rice, salt, water, dill and a little butter/flower rue. You can't screw this recipe up, but hers always tastes exceptionally good. I once asked her why that was; she said the secret was to make it with love and she was quite serious. I've learned you can eat with love as well. Try chewing your food thirty times and think of nothing but what you are eating and be grateful while doing it. "mmmm"

With all slices $2 tomorrow to celebrate their 2nd anniversary, it's looking like a lock on 2 weeks straight...

damn, i could use a slice of john's pie over here in tokyo. salivating on the keyboard!

There is a lot to be said about the artisan gig. It just feels like the way things are going and it makes sense after such a long slog through mass consumption and its homogeneous blandness. Anything made by hand and with intention – love – immediately gives us connection to the item or the person who made it. It is our humanity – our ability to give that gift to each other.

That sense of good intention is missing in items and food produced on a large scale and I think that it why people in the last 50 years have consumed so much –they’ve been trying to fill the void. I kind of believe that there is this idea out there that items or brands can fill this hole but I don’t buy it. It doesn’t have the right intention behind it, you know?

I’m not sure how the artisan approach translates to everything but certainly if our culture tips more that way it will only work to bring things more into balance which would be nice.

Had to share these insights/observations received via email from story sensei Brian Lanahan... I'd buy Brian's book!

More thoughts on Artisan: Robert McKee said something in his Screenwriting seminar that always stayed with me:

“Boredom in story is watching a character pursue a meaningless objective”.

He went on to say that this objective has to be meaningful to the audience— we need to connect to it on a human level, AND it needs to be heartfelt for the character. We have to believe they want this more than anything else.

Artisans are interesting because they are pursuing an objective that is meaningful to them—we see it in how they behave and in the products they produce.

And we have to find meaning in the larger purpose of their work. Apple has artisan values even though they are huge because they have an objective—making technology human— that is inspiring to us, AND we see that they care about it in the ways that they act and the products they make.

To me the malaise with most consumer brands is that they don’t have an objective that is meaningful to themselves. And if they aren’t inspired then how can they expect us to be? They are caught in externals—looking to the consumer for their reason for being.. Focusing on what is popular- what’ll “sell”. And so they end up with generic objectives that they really don’t believe in, that aren’t theirs to live. Which leads to boring stories, because there really is no story. And as you say, People can tell.

Have had a few people pointing me back to this post lately, and a few have commented, "that's what your studio is about, yeah? Artisan communications?"

Thanks! Yeah, man! We're trying to be that. I don't know anybody who loves this work more than I do...

Thanks, blawg readers! You rule.

Let me fill in some blanks for you. I am the big, bald dude you are referencing in the post. One of the women (Betsy) who stayed in our house while we were in Bangladesh is a talented artist who admires your blog and clued me in. I thought I might also chime in.
The term I tossed out was "New Monastic" and the community that John Eads the pizza artisan helped start is:springwatercommunity.org
Just last week John brought one of his mobile pizza cart out to the Lents neighborhood to raise money for a local homeless shelter. I can't say enough about how generous a man he is.
My wife and I are now back in North Portland caring for our chickens and trying to get the garden to grow. We are having backyard firepit conversations with neighbors and getting settled. We miss living out in Lents but we also like being home.
I liked your post it reminded me of some of the conversations in my head as I walked through Ikea this week. I trudged along following the big arrows on the floor to the oblivian of mass produced (but pretty)shit. I wish I was more consistent and bought things that were made with love, but sadly I get distracted.
I have found that trying to follow Jesus has turned everything ass backwards for me. It reminds me that everything is spiritual,from art to pizza to relationships. That the choice I make either brings life or it doesn't. Reading this post made me smile, and I can tell that your art and this blog seems bent on bringing life. That is truly artisan and beautiful.
"Everyone's life is a story, is mine one people would want to read" Don Miller.

BTW, readers, Betsy, in Scott's post above, now works in the studio. Ha!