My two favorite time management theories come from Stephen Covey and Jerry Torchia. Stephen wrote the classic The 7 Habits of Highly Effective People, and Jerry was my first creative director.

My father introduced me to Covey before I was ready. In school, I remember him giving me photocopies of Covey's stuff on that chalky paper that photocopiers used back then. It didn't mean anything to me until I had lived and worked on my own for a few years and tried things the wrong way so many times. Then I picked up Covey again.

Covey takes no credit for the ideas in his book. They come from interviews he conducted with a large number of what he called 'effective' people, people with success and health in their work and personal lives. Covey synthesizes their remarkably consistent approaches into seven habits.

Covey divides work by whether it is important or urgent. Our default mode is to be slave to the urgent. Effective people spend more time on what is important, which means their work is driven by what they most value and not what is most time-sensitive.

Here is the way Covey presents it: 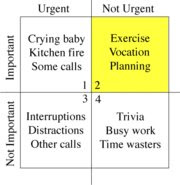 Jerry Torchia's system is a practical application of Covey's model.

Jerry was one of the smartest, most talented, funniest, meanest, most demanding and supportive bosses I ever worked for. His eye for both print and TV was legendary. Some of the television ads he did for Signet Bank and Wrangler jeans still hold up as 60 second pieces of art, no kidding. He was one of the best, a craftsman.

When I joined the Martin Agency for my first job as an art director out of school, they didn't have any offices available, so I shared Jerry's office. I was excited and nervous. They put a tiny drafting table in the corner with a small carrel of drawers and a phone, which I never used when Jerry was in the office. I kept my mouth shut and paid attention.

Jerry had complete focus at work. He didn't screw around. He began and ended his day with his desk completely cleared except for a yellow legal pad with a short list, written in his distinctive handwriting. The items were prioritized with the most important on top - WRANGLER TV CONCEPTS - and the more task-oriented at the bottom - BUY STAMPS.

Jerry's list never had more than eight or so things. He came in the morning, reviewed the list, and got straight to work, methodically spending time on the top two or three or four things on his list. He might go off and concept ideas with John Mahoney for an hour, then draw some thumbnails for a mechanical artist, then come back to his office and start on something else from the top of the list.

At lunch Jerry would go accomplish a couple of mundane things from the bottom of his list. If he had any time left he'd come back and sit at his desk for five or ten minutes and read the New York Times and listen to jazz or classical music on his office radio. Then back at it til 5:30, at which point he'd put away his work, tear off the top sheet from his legal pad, transfer anything that hadn't been crossed-off during the day onto a new sheet of paper for the next day, and go home.

I use a variation of the Covey/Torchia systems, adapted for people whose top priorities involve creative problem solving or inspiration. As a teacher told me once, coming up with a good idea only takes an instant, but the trouble is you never know when that instant is going to arrive.

So, in my system, I make the same list, then I stare at the top three or four on the list, and think about them, and wonder what the hell I am going to do, and how I will ever come up with an idea, and worry about whether this is the time that I can't come up with an idea, and then I pray that inspiration visits, and I wait, and while I am waiting, I do a few things on the bottom of the list, or not, or I organize or clean, or waste time, or wander around, or take pictures, or hang out at Powell's, or go see a movie, or call a friend, or read something about the problem I am trying to solve, or read something else, or look at my books, or write a letter to someone, or draw something, or look up the etymology of words, or stare out the window, or make something out of tape, or post something on my blog. 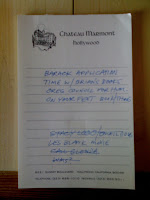 Here's today's list. It's now 5:02 p.m. It may look like I have gotten very little done today, that I have been wasting time, but let me reassure you - and myself - that I am firmly in quadrant 2, and this is part of the process.
Posted by I'm principal of a at 8:47 AM

Insightful - I have my own system which keeps me organized but it works in the spirit of your post. At work especially I regularly organize my day on legal pad - it is easy to let the quadrant 1 take over.