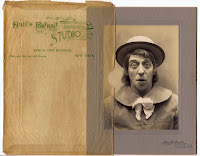 At lunch I took a walk over to Avalon, probably my favorite antique place in Portland, to find more circus references. Avalon always has interesting and surprising stuff, the prices aren't bad, and the owner, Paul, is a great storyteller. 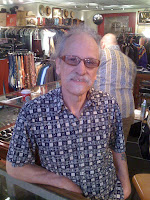 I told Paul I was looking for things related to traveling circuses from the '20s and '30s, and he brought out a "giant ring," a novelty item sold at the circus in those days. It is sized to fit the circus's giant, in this case, J.G. Tarver, Texas Giant.

I also bought some lobbies, promotional photos that vaudeville performers used in the late 19th century. As opposed to cheaply-printed copies, these high-priced promos used real photographic prints on embossed boards. They were personally signed and given to agents, theatre owners and patrons.

The photo at the very top is marked "The Strenuous Basso." I like the vellum envelope as much as the photo. Above is Edward Berry, half of the team Berry & Benson. I haven't been able to find out a thing about them on the internet, like they never existed.
Posted by I'm principal of a at 2:13 PM